Those questions are crucial for the dynamics and performance of a company. Therefore Managers and Leaders need to think about the best organizational structure for their business. 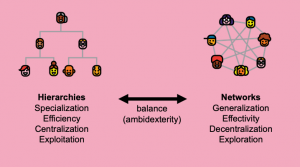 There are indeed tons of possibilities of how you can create a company structure. You can take the hierarchical approach or the network approach, you can focus on efficiency or effectivity, you can centralize or decentralize. There is no right or wrong, but you need to balance those regarding your needs and context.

Conway’s Law:
“Organizations which design systems are constrained to produce designs which are copies of the communication structures of these organizations.” (Melvin Conway)

Management 3.0 offers a game, called the Meddlers game. The name has been created by Jurgen Appleo in the style of the famous board game “The Settlers of Catan“.

The Meddlers game helps you to simulate the organizational structure in a safe environment. You can play around with it, experiment with different frameworks and discuss them.

Using the Meddlers Game in a Real Case Scenario

When I was working as an Agile Transformation Coach in a Japanese company, one of the issues was that team morale was quite low and that people there were a few people who had extremely high overtime. I suspected one of the reasons was, that the organisation was organized in functional teams, which means that each team was responsible for only one part of the project. This is typical for Waterfall designed projects.

When I talked with the workers they said that they don’ have real oversight of the whole project. Changing the team structure into cross-functional teams would be much more effective in my opinion, because the teams then can own the whole project and can finish it at once. This would give them a feeling of ownership and pride. Furthermore, team members can support each other and overtime might go down.

To promote this idea and to show my manager how this could be achieved I suggested playing the Meddlers game together. He was not convinced by the cross-functional team approach, but luckily he agreed to play the game with me.

I sat together with him and at first, we used the game to create the current organizational structure. It was really good to understand the status-quo and we could exchange opinions by watching it from the birds perspective.

We took a picture of it and then we used the same amount of pieces to create cross-functional teams. During the play, we tried out many possible patterns and had really deep discussions. In the end, we found a good result on how a cross-functional approach could look like and how it could work. We talked about the pros and cons and exchanged our viewpoints.

Failure and Success at the Same Time

My manager found this cross-functional approach really interesting but he was not 100% convinced that this would be the right approach for the company because they provided 3rd party service to other companies. And it would have required him to convince a lot of other people and the CEO as well. To do such a change in a Japanese company a lot of people need to agree and I guess he was afraid of taking on such a battle. Furthermore, the financial situation at this point was not so great, so other things were more important at this time for the management instead of changing the organizational structure drastically. I also found out later that the whole Agile transformation movement in the company would be stopped because of that reason.

So, unfortunately in the end we did not change the company structure and the functional approach continued.

I learned that timing and the people who you talk to is very important. I think my manager, who actually was a supporter of the Agile ideas in the company, did already know that the Agile transformation will not continue. If I would just have had talked to him earlier … But it is like everything in life, timing is everything.

And also next time it might be better to include more managers in the discussion who are potential movers and eventually more than one person is supporting the new idea. It would maybe have helped my manager to not feel alone when starting the initiative of convincing the other managers in the company.

Nevertheless, by playing the game I could much better explain my idea and we could grow from each other’s opinions. In the end, Management is all about communication, isn’t it? And even this experiment failed still, I could make my first experience of using the Meddlers game in a real context. And to me, it proved, that it can be used with a real case scenario. So, it was also a success, at least for me personally.

I can only recommend trying out the game when you want to experiment with new structures and want to have deep discussions in a safe environment. In the end, it is better to push paper tiles on a table around instead of people.