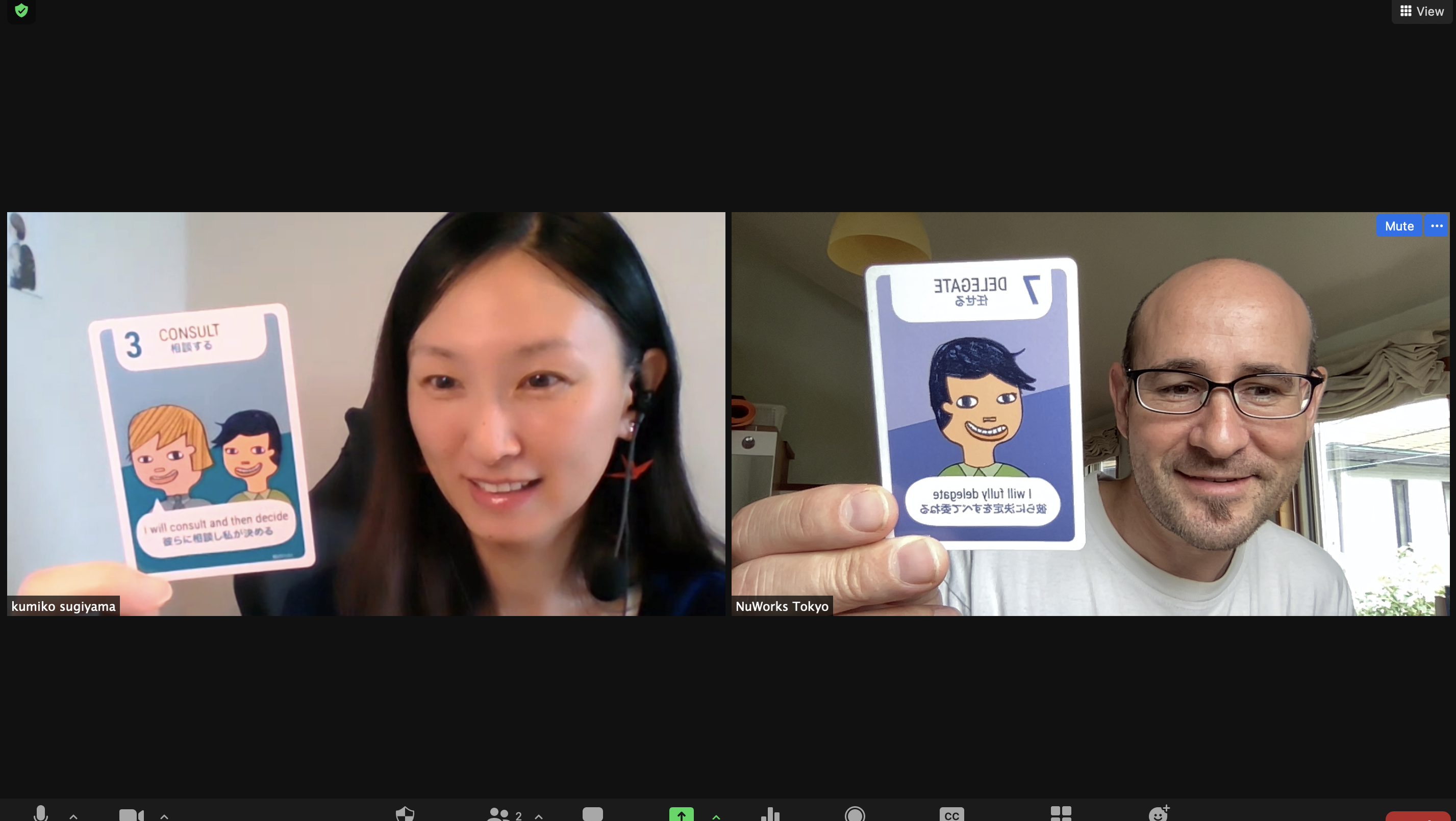 Time flies! Kumiko, our co-worker at NuWorks works now already for 4 years here.
When she joined my company in 2017 her tasks were quite limited. She was mainly doing translation of workshop material and website translations. But as the business of NuWorks grew also her responsibilities grew. Nowadays she is doing all the marketing of NuWorks, managing and organization of workshops, being involved in the business development activities and even running her own workshops now.
I am pretty sure that without her engagement NuWorks could not have become what it is today. And Management 3.0 would not as successful in Japan as it is now. Thank you, Kumiko! 🙂

But how did Kumiko and NuWorks grow together?

The short answer is through empowerment.
I used the 7 levels of Delegation from Management 3.0 as the guideline for my leadership because it allows me to delegate key decision areas in a very easy to use way. My vision was, to have a self-organized company where my involvement is as low as possible, so I can focus more on the next big things and bring new sophisticated methods from overseas to Japan.

Then the manager and the team defines key decision areas and adds them to a Delegation Board (like in the example below).
To define the areas you are playing the Delegation Poker game like Planning Poker:

Our First Delegation Board

So, you see, I needed to decide everything myself and had a lot to of tasks on my side as well.
My goal was to move them to the other side.

How to empower your team member?

There are two ways how you can empower team members, by giving authority or by increasing the ability of someone. I think the latter comes first and is the more important part of it. But it also takes more time. It is easy to say to somebody, “Go ahead and manage the Company Facebook account yourself” but to actually show it to someone and explain how to do it takes time and sometimes a lot of patient.
I wanted to delegate the management of the NuWorks Facebook account to Kumiko. At that time she was not very confident that she could do it as she is not very tech savvy. I was very confident that she could do it though. (For those who don’t know, the company Facebook management is much more complex than the private one.)
We sat together and I explained the Facebook interface and went through everything step-by-step. It took us more than one meeting but after a while she got used to it and could do it without me.
So, the level delegation level changed: 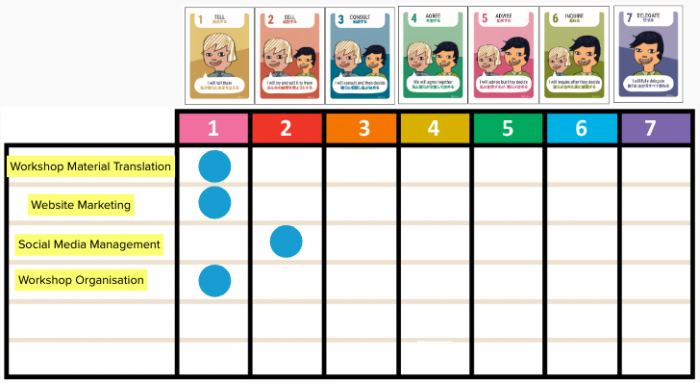 Social Media Management: I selected the topics and then Kumiko translated and added it to Facebook.

The first step was done and I had a bit more time to do other stuff.

Once her confidence in managing the company Facebook account grew, her will for risk taking grew also. She began to post her own ideas on Facebook which was really great.
Without much further involvement from my side we jumped from level 2 to 4: 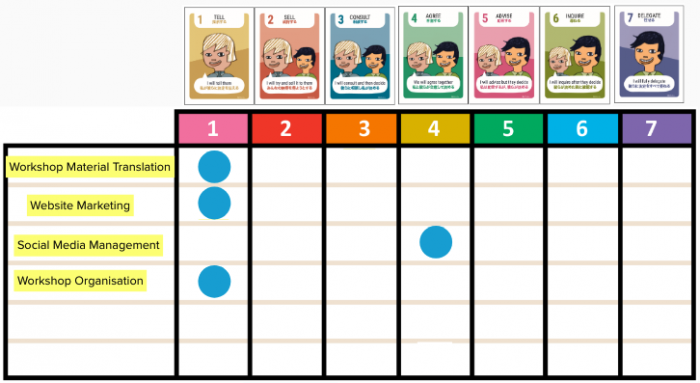 Social Media Management: We selected the topics together and then Kumiko translated and added it to Facebook.

And over time I got so tied up with other work that I did not have anymore time to get involved in the Facebook activities. I decided to give full authority to her.
The delegation board changed to this: 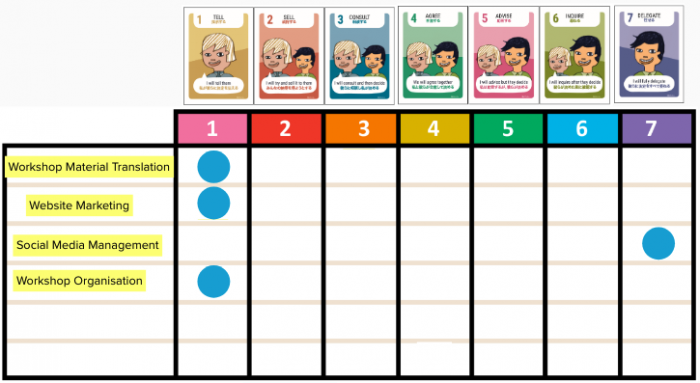 Social Media Management: Kumiko selects the topics and added them to Facebook.

In the past, I wrote the social media posts in English and Kumiko translated them to Japanese and I posted them. But as she now wrote the posts directly, we saved the extra step of translation. Not only did I save time by not being involved in the process but also on a whole we saved time by getting rid of some (unnecessary) tasks. In other words, we became more efficient. This was a great experience and learning for me. It showed me that empowerment is really powerful and can help your team to be more productive.
The extra time I had, I invested into Twitter, which helped us to reach a wider audience.

The levels in the area of Social Media Management Delegation were an example. The other areas have developed in a similar way. The whole board today looks like this: 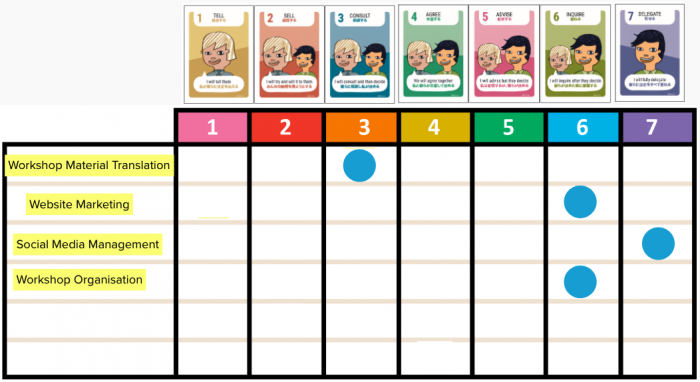 As you can see the delegation levels are much more to the left now. I think I reached my goal of creating a self-organized team.

And what comes next?

Team empowerment is an ongoing process and we are always growing. That means that also the delegation-level are in constant change. Kumiko is now very ambitious and willing to take on new challenges. Last year she became an IKIGAI coach and has run already several IKIGAI workshops. And since last month she also became an official Management 3.0 facilitator. She already assisted in one session and I am happy that she is increasing the diversity of Management 3.0 facilitators in my team.

Every team and organization has delegation levels if made visible with a delegation board or not. But a delegation board helps you to visualize it and reflect on it.
And for me, it is great and fulfilling to see how people grow with the power they are given.
Furthermore, I learned that empowerment is an ongoing process and requires time and engagement from both sides. It is not always easy but the benefits outweigh the investment by far.
How are you dealing with delegation and empowerment?

Workshop about Management 3.0 at the Tokyo Business Meetup

Item added to your cart

Continue Shopping Go To The Cart